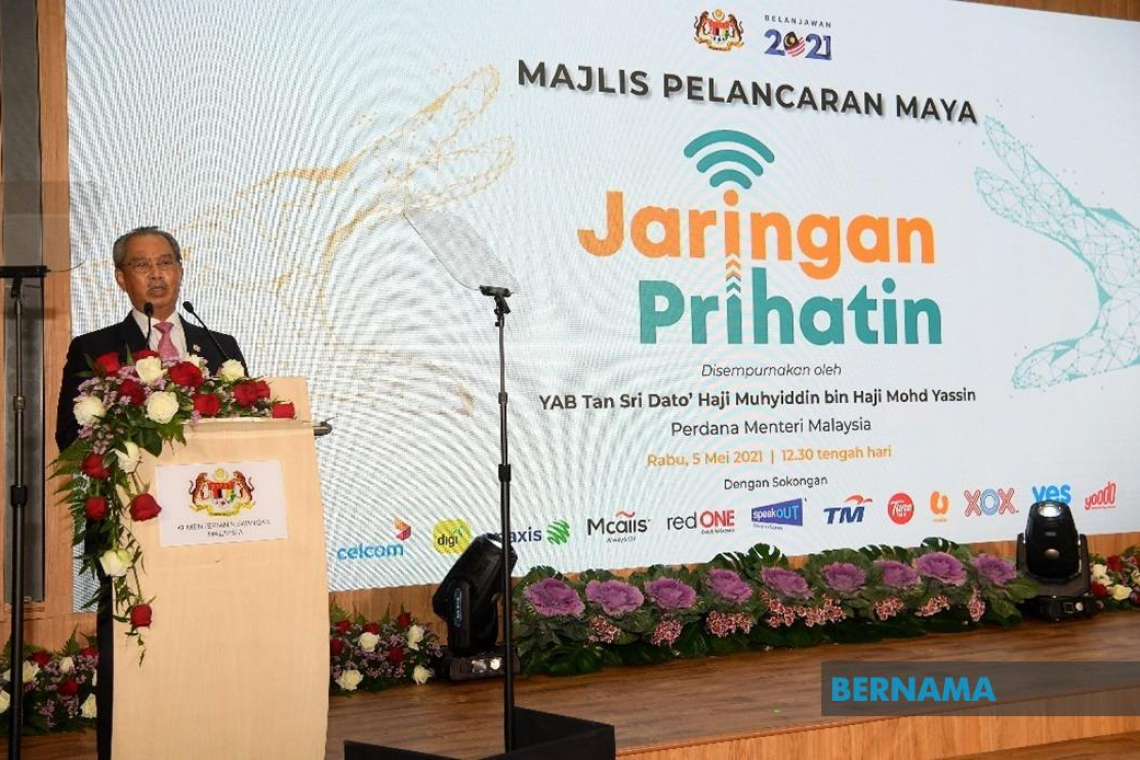 PUTRAJAYA, May 5 – Prime Minister Tan Sri Muhyiddin Yassin today launched the Jaringan PRIHATIN Programme involving an allocation of RM3.5 billion in an effort to bridge the digital gap of the B40 group.

He said the programme will benefit approximately 8.5 million people from the B40 group who will be able to own smartphones or enjoy the broadband internet plan.

The government will provide RM2 billion of the total allocation, while telecommunication companies and service providers will chip in the remaining RM1.5 billion, especially in terms of free data, he said at the launch of the programme here today.

“In order to bridge the digital gap among the community, there is a need to ensure that everyone can get the access at a reasonable cost, and has the skill to make optimal use of the internet by 2030,” he said.

In order to overcome the challenges in the digital divide, Muhyiddin said three main strategies would be focused on namely accessibility, affordability and skills.

The government, he said, was aware that in the aspects of network coverage, penetration and speed, there was still a lot of room for improvement, especially in some low-density rural areas.

He said the government had even agreed to the upgrading of broadband services nationwide through the RM21 billion National Digital Network Plan (JENDELA) which included a fibre optic plan and increasing the quality of 4G coverage by 2022.

The government will also expedite the provision of 5G infrastructure with private investment through Digital Nasional Bhd which was estimated at RM15 billion, he said.

“InsyaAllah, these efforts will help in narrowing the broadband coverage and speed gaps over the next five years,” he said.

In terms of affordability, Muhyiddin said there was still a gap in financial capability to obtain internet access.

Although the cost of the lowest broadband plan in Malaysia was 1.1 per cent of the country’s gross national product (GNP) per capita which is in line with the United Nations guidelines, it was still high for a certain part of the low-income community, he said.

In fact, he said the cost of using smartphones would also consume a large portion of the monthly salary of those from low-income households.

On skills, Muhyiddin said the lack of digital skills was also a factor that would hamper the efforts to increase digitisation among the community.

To overcome the issues related to skills, especially for small and medium enterprises (SME) to adopt digital transformation, Muhyiddin said the government had also announced various incentives in the 2021 Budget, such as the SME Digitalisation Grant worth RM150 million, Industry Digitalisation Transformation Fund worth RM1 billion and the establishment of RM1 billion High Tech Facility.

He said the government, through the MCMC, had built 910 community internet centres nationwide, which serve as digital community halls to help the local communities to equip themselves with digital skills such as online business or e-commerce.

The prime minister said the digital gap among the people must be bridged in the effort to address the COVID-19 pandemic and to lay the foundation stone for more inclusive growth of the country’s economy.

“While digital inclusion is not the only solution to inequality, it is a fundamental component to enable social inclusiveness among the people to be achieved.

“As the pulse of the Shared Prosperity Vision 2030, digital inclusiveness will continue to be the government’s main focus to make Malaysia a more fair and equitable country a reality,” he added.