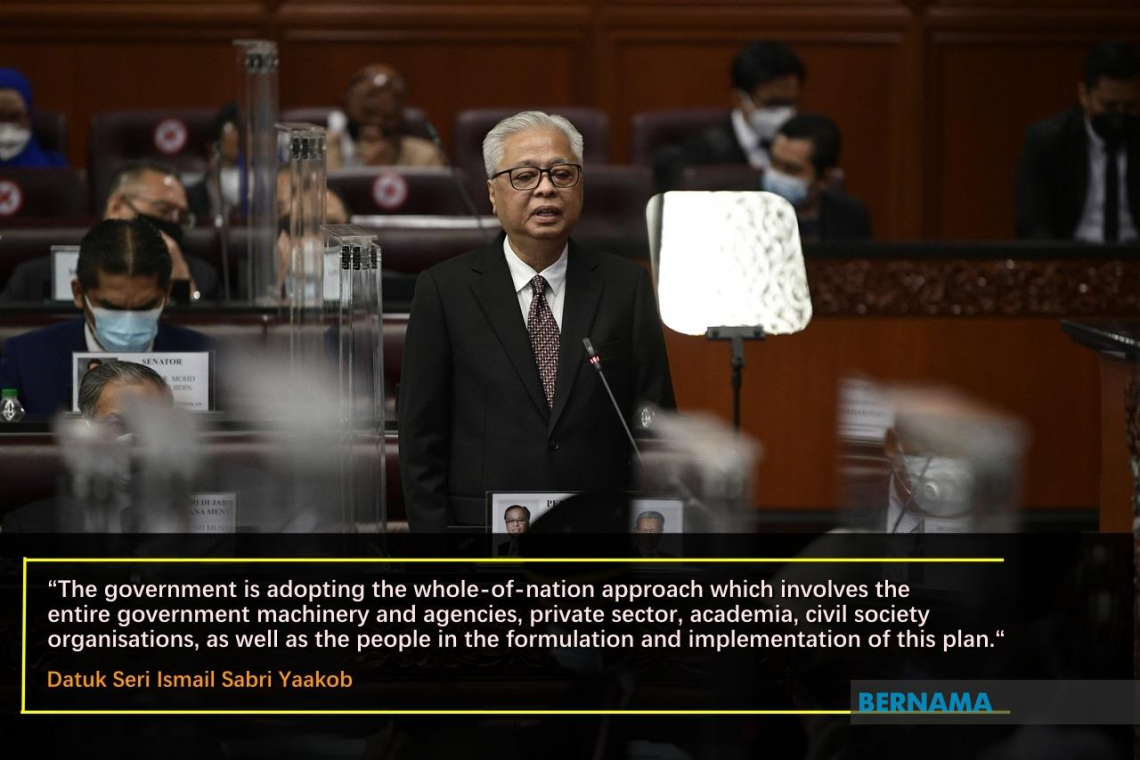 The 12MP was tabled at the Dewan Rakyat on Sept 27 and passed last Thursday after being debated by 106 lawmakers.

The document, which contains the country’s five-year development plan, will have to be debated again before it can be passed by the Senate.

Ismail Sabri said the 12MP is a comprehensive development plan to ensure sustainable economic growth with a more equitable distribution of opportunities and outcomes.

With the aim of creating a prosperous, inclusive and sustainable Keluarga Malaysia (Malaysian Family), he said the reforms introduced in the 12MP covered three themes and four policy catalysts as well as 14 drivers of change.

“The government is adopting the whole-of-nation approach which involves the entire government machinery and agencies, private sector, academia, civil society organisations, as well as the people in the formulation and implementation of this plan.

“I am aware that the entire Keluarga Malaysia has high hopes for the government to address the current twin crises (of economy and health). The government will allocate RM400 billion to meet the needs of the 12MP, especially to fund development projects,” he said.

However, he said in the current limited financial situation, the focus of the government’s expenditure for this year and next year was to protect lives and livelihoods, as well as to fulfil its commitment to existing projects.

The Prime Minister said the government was also in the midst of finalising the Policy Implementation Plan (PPD) under the coordination of the Economic Planning Unit to ensure the achievement of the targetted outcomes.

He said the PPD, which is expected to be completed next month, would align the strategies and initiatives with key performance indicators (KPIs) and the responsible ministries as well as the coordinating and implementing agencies.

“I also welcome feedback from all senators on the proposed implementation of the 12MP policies and strategies,” he said.

He also gave assurance that all strategies and initiatives under the 12MP will be implemented responsibly with integrity.

Ismail Sabri said he was confident that with the cooperation from all quarters and the spirit of Keluarga Malaysia, all the targetted outcomes can be achieved even if there were individuals who are sceptical about it.

In this regard, he said proper efforts need to be taken to monitor and implement the 12MP initiatives and strategies.

At the same time, the Prime Minister said Malaysia was almost successful in tackling the impacts of COVID-19, but the public should not be complacent as the pandemic was not over, and that they should be ready to live with it in the new normal as it enters the endemic phase.

“For the sake of Keluarga Malaysia, the government will continue its efforts to protect lives and livelihoods, while focusing on the agenda to revive the economy and boost the country's competitiveness,” he said.

“I am optimistic that with the current signs of economic recovery as well as the national development agenda contained in the 12MP and the initiatives under Budget 2022 which will be announced soon, we will be able to steer the country towards a more sustainable economic growth,” he said.